The Beauty of Roquefort

The French have such a beautiful relationship with cheese.  America has certainly grown to love cheese as well!  While there are literally hundreds of cheeses, many of which are native to France, Roquefort is one prized cheese of France.  Many people consider blue cheese and Roquefort cheese to be one in the same but that just isn’t true.  While there are quite a few differences the main one is that blue cheese is made from cow’s milk and
Roquefort is made from sheep’s milk.  In 1961, it was made official that a cheese could only be classified as Roquefort if it was aged in the caves of Mont Combalon in the commune of Roquefort-sur-Soulzon in France.

Roquefort is one of the 3 greatest blue cheeses in the world alongside Gorgonzola and Stilton.  It holds a strong clean flavor with saltiness opposite to that of the sheep’s milk.  Its texture is damp but will still crumble and melt in your mouth. 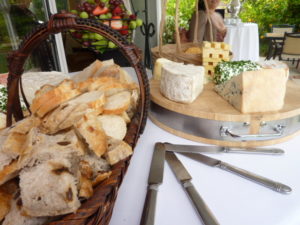 We recently featured Roquefort on the menu for a wedding at a private estate.
It was among some other delicious cheese and fresh fruit for an appetizer course.

A few ideas for enjoying Roquefort in your home is to spread it on a fresh sliced crustini or serve it crumbled in a nice summer salad.  If you would like more suggestions on how to incorporate Roquefort into your personal kitchen, contact us.